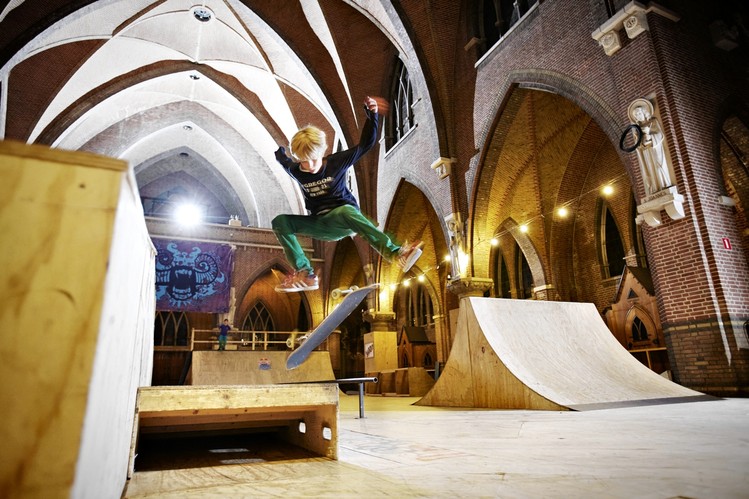 The former Roman Catholic Church of St. Joseph in Arnhem, Netherlands, one of hundreds of decommissioned churches, was turned into a skate park. MERLIJN DOOMERNIK FOR THE WALL STREET JOURNAL
By
Naftali Bendavid

ARNHEM, Netherlands—Two dozen scruffy skateboarders launched perilous jumps in a soaring old church building here on a recent night, watched over by a mosaic likeness of Jesus and a solemn array of stone saints.

This is the Arnhem Skate Hall, an uneasy reincarnation of the Church of St. Joseph, which once rang with the prayers of nearly 1,000 worshipers.

It is one of hundreds of churches, closed or threatened by plunging membership, that pose a question for communities, and even governments, across Western Europe: What to do with once-holy, now-empty buildings that increasingly mark the countryside from Britain to Denmark?

The Skate Hall may not last long. The once-stately church is streaked with water damage and badly needs repair; the city sends the skaters tax bills; and the Roman Catholic Church, which still owns the building, is trying to sell it at a price they can’t afford.

“We’re in no-man’s-land,” says Collin Versteegh, the youthful 46-year-old who runs the operation, rolling cigarettes between denouncing local politicians. “We have no room to maneuver anywhere.”

The Skate Hall’s plight is replicated across a continent that long nurtured Christianity but is becoming relentlessly secular. 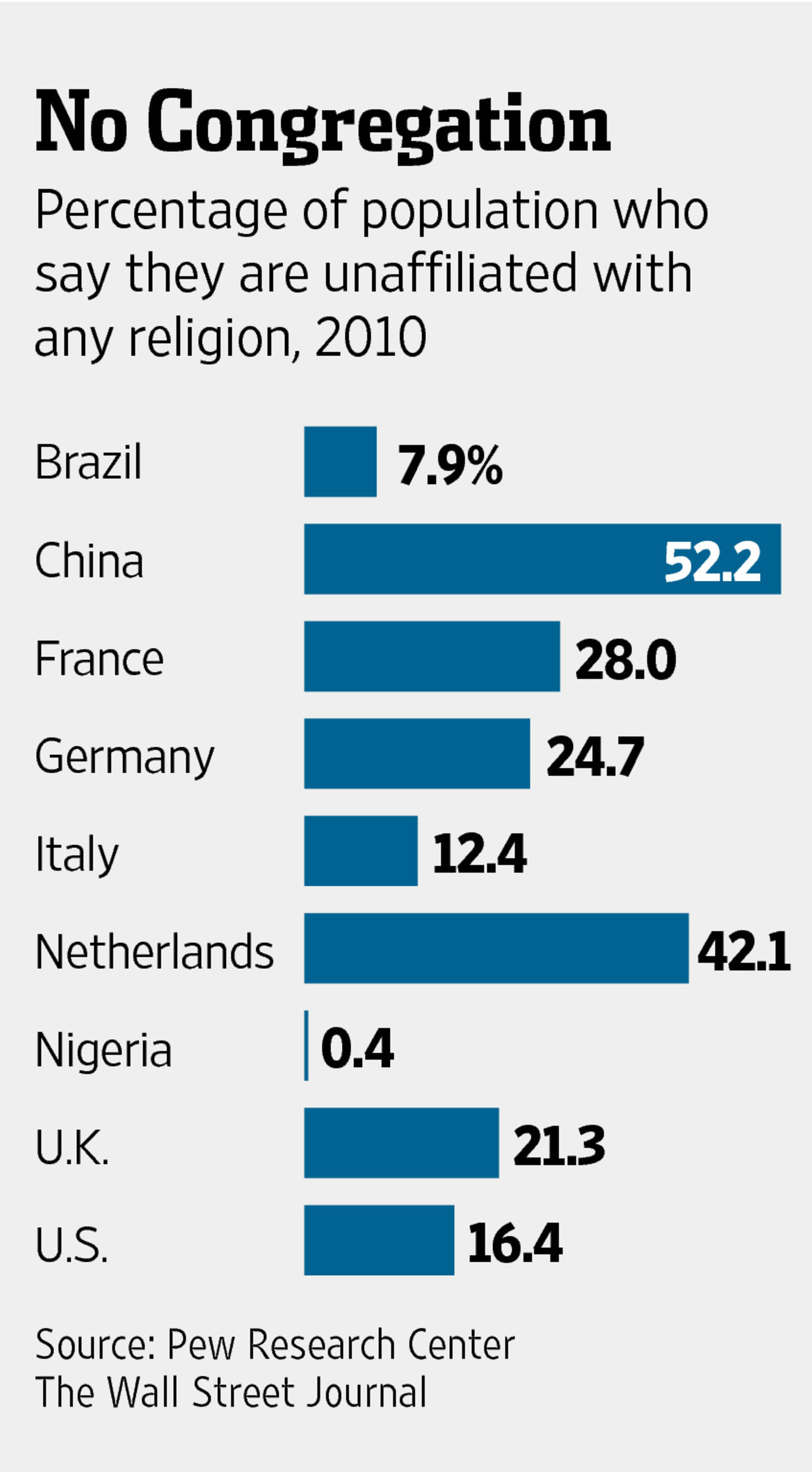 The closing of Europe’s churches reflects the rapid weakening of the faith in Europe, a phenomenon that is painful to both worshipers and others who see religion as a unifying factor in a disparate society.

“In these little towns, you have a cafe, a church and a few houses—and that is the village,” says Lilian Grootswagers, an activist who fought to save the church in her Dutch town. “If the church is abandoned, we will have a huge change in our country.”

Trends for other religions in Europe haven’t matched those for Christianity. Orthodox Judaism, which is predominant in Europe, has held relatively steady. Islam, meanwhile, has grown amid immigration from Muslim countries in Africa and the Middle East.

For Christians, a church’s closure—often the centerpiece of the town square—is an emotional event. Here people have worshiped, felt grief and joy, and quested for a relationship with God. Even some secular residents are upset when these landmarks fall into disuse or are demolished.

When they close, towns often want to re-create the feeling of a community hub by finding important uses for these historic buildings. But the properties are usually expensive to maintain—and there is a limit to the number of libraries or concert halls a town can financially support. So commercial projects often take the space.

Europe-wide numbers of closed churches are scarce, but figures from individual countries are telling.

The Church of England closes about 20 churches a year. Roughly 200 Danish churches have been deemed nonviable or underused. The Roman Catholic Church in Germany has shut about 515 churches in the past decade.

But it is in the Netherlands where the trend appears to be most advanced. The country’s Roman Catholic leaders estimate that two-thirds of their 1,600 churches will be out of commission in a decade, and 700 of Holland’s Protestant churches are expected to close within four years.

The U.S. has avoided a similar wave of church closings for now, because American Christians remain more religiously observant than Europeans. But religious researchers say the declining number of American churchgoers suggests the country could face the same problem in coming years.

Many European churches have been centerpieces of their communities for centuries. Residents are often deeply attached to them, fighting pragmatic proposals to turn them into stores or offices.

Mr. Versteegh sees the skate hall as a benefit to the town, saying it serves to protect the building and also gives youngsters a way to enjoy themselves in a constructive way. But he says local Catholic and city leaders refuse to support it, he thinks due to its vaguely rebellious aura. “We don’t know which door to knock on,” he says. 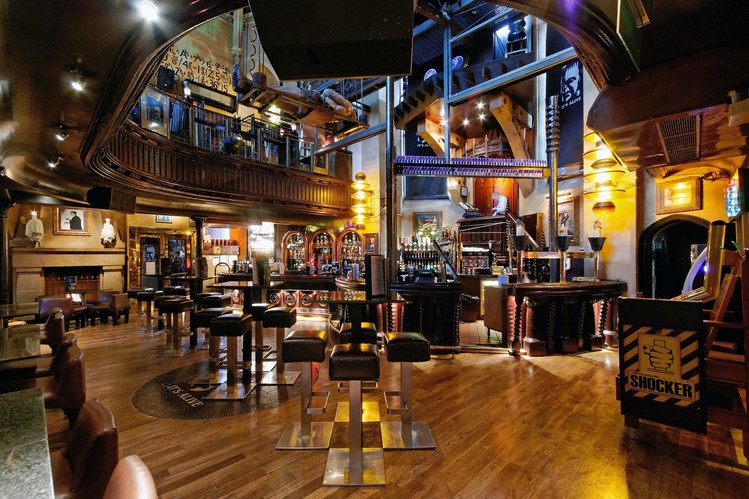 Church and city leaders deny that, saying they like the Skate Hall but cite its precarious finances. “Collin wants sweet love. We’re going to give tough love,” says Gerrie Elfrink, Arnhem’s vice mayor. “He wants the easy way—‘Give me money and then I’ll have no problems.’ But that’s not sustainable.”

As communities struggle to reinvent their old churches, some solutions are less dignified than others. In Holland, one ex-church has become a supermarket, another is a florist, a third is a bookstore and a fourth is a gym. In Arnhem, a fashionable store called Humanoid occupies a church building dating to 1889, with racks of stylish women’s clothing arrayed under stained-glass windows.

In Edinburgh, Scotland, a Lutheran church has become a Frankenstein-themed bar, featuring bubbling test tubes, lasers and a life-size Frankenstein’s monster descending from the ceiling at midnight.

Jason MacDonald, a supervisor at the pub, says he has never heard complaints about the reuse. “It’s for one simple reason: There are hundreds and hundreds of old churches and no one to go to them,” Mr. MacDonald said. “If they weren’t repurposed, they would just lie empty.”

Many churches, especially smaller ones, are becoming homes, and that has spawned an entire industry to connect would-be buyers with old churches.

The churches of England and Scotland list available properties online, with descriptions worthy of a realty firm. St. John’s church in Bacup, England, for example, is said to feature “a lofty nave as well as basement rooms with stone-vaulted ceilings,” and can be had for about $160,000. 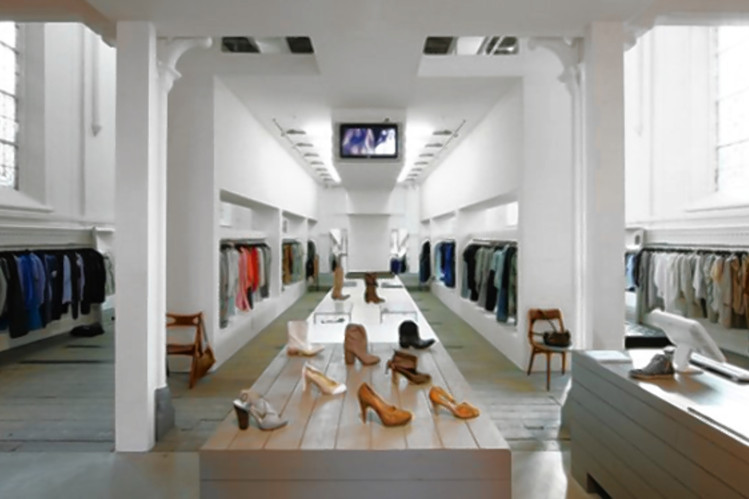 The British website OurProperty is less subtle. “Is modern-day humdrum housing your idea of a living hell?” it asks. “Is living in a converted church your idea of heaven above?” If so, “there is a whole congregation of converts and experts out there ready to help you make the leap of faith.”

Unused churches are now a big enough problem to attract the attention of governments as well. The Netherlands, along with religious and civic groups, has adopted a national “agenda” for preserving the buildings. The Dutch province of Friesland—where 250 of 720 existing churches have been closed or transformed—fields a “Delta team” to find solutions.

“Every church is a debate,” says Albert Reinstra, a church expert at Holland’s Cultural Heritage Agency. “When they are empty, what do we do with it?” Preservationists say there often isn’t the money needed to create new community-oriented uses for the buildings.

That debate can play out personally and painfully. When Paul Clement, prior of the Augustinian Order in the Netherlands, joined in 1958, the order had 380 friars; now it is down to 39. His monastery’s youngest friar is 70, and Father Clement, himself 74, is developing plans to sell its church.

“It is difficult,” Father Clement says. “It’s sad for me.”

In the U.S., church statisticians say roughly 5,000 new churches were added between 2000 and 2010. But some scholars think America’s future will approach Europe’s, since the number of actual churchgoers fell 3% at the same time, according to Scott Thumma, professor of the sociology of religion at Connecticut’s Hartford Seminary.

Mr. Thumma says America’s churchgoing population is graying. Unless these trends change, he says, “within another 30 years the situation in the U.S. will be at least as bad as what is currently evident in Europe.”

At the Arnhem Skate Hall, the altar and organ of the church, built in 1928, have been ripped out, while a dusty cupboard still holds sheet music for a choir that hasn’t sung in 10 years. A skateboard attached to a wall urges, “Ride the dark side.”

Two dozen young men speed along wooden ramps and quarter-pipes, their falls thundering through the church, as rap music reverberates where hymns once sounded. An old tire hangs on the statue of a saint. 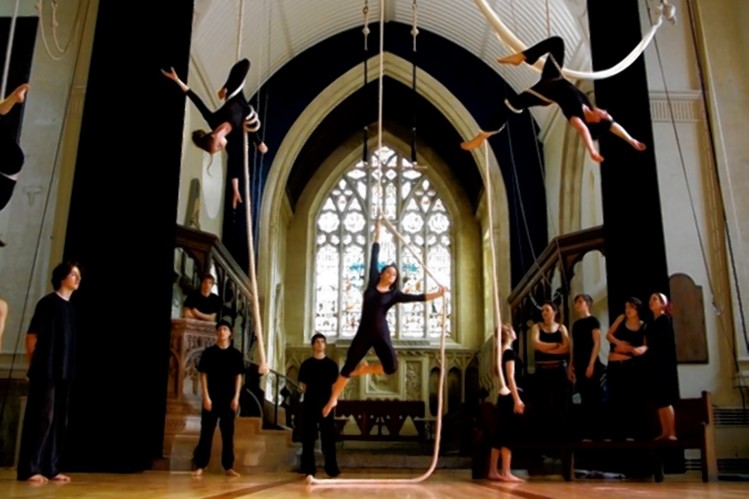 Puck Smit, 21, a regular visitor, says the church ambience enhances the skating experience. “It creates a lot of atmosphere—it’s a bit of Middle Ages,” he says, between gulps from a large bottle of cola. “When I first saw it, I just stood there for five minutes staring.”

Another regular, Pelle Klomp, 14, says visitors occasionally stop by to complain. “Especially the older people say, ‘It’s ridiculous, you’re dishonoring faith,’ ” he says. “And I can understand that. But they weren’t using it.”

Mr. Versteegh, who oversees the hall, says city and church leaders won’t discuss their plans with him. The church needs about $3.7 million in maintenance, he estimates, and would cost $812,000 to buy, including the rectory—far beyond his resources.

Father Hans Pauw, pastor of St. Eusebius Parish, confirms the parish is trying to sell the church, but says church leaders have no problem with skaters using it for now. He said the parish is talking to a potential buyer.

“There are some things we don’t want—a casino or a sex palace or that kind of thing,” Father Pauw says. “But when it’s no longer a church in our eyes, then it can have any purpose.” As for the painting of Jesus holding a skateboard that now adorns the interior, he says, “I can see the humor in it.”

Mr. Elfrink, the Arnhem vice mayor, insists the city has done what it can to support the Skate Hall, helping fund the wooden skating floor and paying last year’s tax bill. “I hope it can stay a skate hall,” Mr. Elfrink says.

Mr. Versteegh sometimes wonders if it will. “Is there any point in continuing to do this if nobody is supporting you?” he says. “You have a building of value—historic value, cultural value—that is still owned by the Catholic Church. But there are no worshipers anymore.”

Puck Smit and Pelle Klomp are regular visitors to the Arnhem Skate Hall. An earlier version of this article misspelled their first names as Pack and Pella. (Jan. 5, 2014)

Write to Naftali Bendavid at naftali.bendavid@wsj.com